Happy Birthday, Rex! Pet Parties to Roll Over and Play Dead For 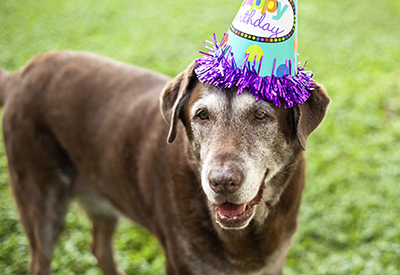 By Sue
/ in Life Should be Celebrated
0 Comments

I grew up with pets and spent a good deal of time on a farm. Animals were just part of everyday life, and although the Brown Swiss whose stall was adjacent to the milk can cooler was blind and enjoyed a good scratching between her eyes, we tended not to show an overabundance of love and affection to the barn inhabitants. Occasionally we’d gather up the kittens from the hayloft and play with them on the front lawn, only to have the three-legged mama cat show up to escort her brood back to the safety of the barn.

Our cats at home tended to scamper away from children as quickly as they could in a concerted effort to avoid a good tail-pulling or to save themselves from being dressed up in baby clothes. They weren’t the cuddly types and certainly didn’t come when called. Perhaps they appreciated a warm, dry place where food and water magically appeared, but I’d be willing to bet that even that seemed like a steep price to pay for occupying a home with 11 children and full-time daycare.

But Oliver, our orange and white tabby, and Anya, our gray, are different. They’ve become part of the family. The type of inclusion that leads the kids to say things like, “If zombies ever invade, who is going to grab Ollie and Anya?” They’re officially part of our family evacuation plan now, I guess.

Oliver is 100% Maggie’s cat. He doesn’t come when I call. He doesn’t snuggle up to Ryan or me. He doesn’t brush up against our legs or hop up on the bed to purr next to us. But when Maggie calls, “Ollie! Time for bed!” he comes running, trots up the stairs with her, and off to bed the twosome go. Strangers at the grocery store ask about Maggie and her cat Oliver, and then seeing my puzzled face explain that they are so-and-so’s mother from school. Apparently, Maggie spends a good deal of time chatting about her furry friend! I would liken their bond to that of Timmy and Lassie, but Maggie has yet to be rescued from a well. I can’t get close enough to Oliver to feed him his pills, but Maggie gets away with tying little dolly bonnets on him and pushing him around in strollers. Go figure. Since Ollie and Anya have entered our lives, I now understand how much pets can become part of a family.

“Are we going to have a birthday party for Oliver?” Maggie asked when Oliver’s first birthday approached. In the middle of cooking supper and thinking about all the things on my to-do list after the kids were in bed, I was caught off-guard. “We have to have a party for Ollie. Right, mom?” I guess so!

While our “party” amounted to the kids and me using a fish shaped cookie cutter to form some tuna fish and all of us singing to a cat, I’d like to share with you a dog party a college friend of mine threw for Winston Churchill, her Beagle.

Now, Rachel is the type who adores any reason to bring people together in a celebratory fashion. Plus, she’s a bona fide dog lover. Arf Arf! Woof! Bow-wow woof! read her invites, with a handy translation alerting us humans that Winston was turning one and we were all invited, along with our dog companions, to a backyard party. The menu? Hotdogs, of course! Although we didn’t have a dog of our own to bring, the kids loved playing with Lucy the Weimaraner, Marley the Lab mix, a Giant Schnauzer named Kaiser, and a medley of other doggies.

Cute little cellophane bags filled with puppy chow were wrapped with dog bone ribbon for the kids, and Rachel had made an adorable display of “pupcakes” instead of a birthday cake. Super cute!

A brightly colored washtub sat on the deck filled with yellow, pink, blue and green tennis balls. The kids played fetch with the canine crew, and parents and adults sipped (what else?) Colorado Bulldogs and something called a Tailwagger. Rach’s boyfriend Steve was happy to mix up a Kitty Cocktail for Maggie, but exercised some poetic license to redub it the “Poochie Punch.”

Fortunately, all the dogs seemed to get along rather well. The kids reveled in playing with them all, and I have to hand it to Buddy, the Border Collie, for never tiring of fetching a bevy of balls thrown by the kids. Mr. Skittles, who seems to be a whitish mix of small breed with another small breed of some kind, took home the award for walking the farthest on his hind legs (a crowd pleaser!), and Vlad, a blue-eyed Siberian Husky I fell utterly in love with, won the kids over in the wagon-pulling contest. Rach was sure to show off the birthday boy Winston’s skills at rolling over and speaking. Jack even got him to shake a few times.

By party’s end, Maggie and Jack were dog-tired. Knowing that we didn’t have a pooch of our own, Rachel had gone ahead and had little plastic food bowls printed with Oliver and Anya’s names, which were smaller versions of the dog bowls she had gotten for the dog guests. She presented the kids with party favor bags – “Doggie Bags” that were adorably decorated with fire hydrants and bones.

I think back to days on the farm and I never would have suspected that the day would come when I’d be wrapping up a box of Milk Bones to attend a dog’s birthday party. But it was a fabulous day! And any reason to get together and celebrate life’s little moments is a good thing.