St. Patrick’s Day – Fun for Everyone! 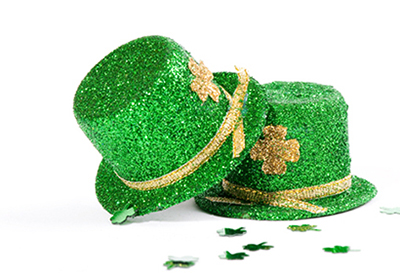 My parents insist that I have no Irish blood in me, despite my red hair, freckles, deep and enduring love for Irish music, and having taken a fancy years ago to the occasional Guinness with soda bread. Who can be unhappy at an Irish pub? Surrounded by cheerful music and hearty ale is just a good place to be, I say.
This week brings with it the celebration of St. Patrick’s Day, and whether or not your forefathers or -mothers hailed from the Emerald Isle, this festivity proves to be a wee bit ‘o fun for all revelers! Whether your weekend destination includes big city fun for St. Paddy’s, or a glass or two of green beer at your local pub, there’s something for everyone.
The celebration of St. Patrick’s Day in the U.S. predates the American Revolution. Surprising to some, the first parade honoring the Feast of St. Patrick happened right here in the States in 1762. Irish soldiers serving in the British Army took it upon themselves to celebrate the patron saint of their native Ireland while serving in New York City. And since that time, with the healthy influx of Irish immigrants to the U.S., St. Patrick’s Day revelries have only grown in size.
Celebrated in countries such as Ireland, Northern Ireland, Great Britain, Canada, the U.S., Australia, New Zealand, Argentina, Japan, South Korea, and others, St. Patrick’s Day has become the most popular saint’s day in the world. Celebrants dress in green, bedeck themselves with shamrocks, swill green-dyed beer, cheer on parades, and generally have a jolly Irish time.
In the U.S., cities with large Irish-American populations buzz with parades, celebrations, and revelry. New York City still boasts the biggest St. Patrick’s Day Parade in the world, with over 150,000 marchers and 2 million spectators. Chicago parade-goers can enjoy a green dyed Chicago River, and Boston residents line up along the parade route to watch colorful floats and marching and pipe bands wind their way from the Broadway “T” Station to Andrew Square in South Boston.
If you’re the athletic sort, several cities, including St. Louis, Seattle, Dallas and Minneapolis, are host to St. Patrick’s Day marathons and runs. After getting your km’s run, kick back and enjoy an emerald-hued draft.
From family fun parades to merry-making pub parties, St. Paddy’s is a chance to welcome the cheerfulness of spring and socialize with your community, whatever their heritage might be.
Dust off your “Kiss Me, I’m Irish” t-shirt, polish your shoes for a jaunty Irish jig, and get ready for this year’s St. Patrick’s Day festivities. Remember the old saying – “Everyone’s Irish on St. Patrick’s Day!”